Beto: His name sounds like an African name from Soweto South Africa — But his roots are Irish

The Democrats present to the American people for President, a shaky group of builders without a blueprint or floor plan.

So far it’s mostly the he-clowns and she-clowns and half-empty barrels of the Democratic Party who have thrown their hats in the ring to run for president. One of the more viable candidates and fiercest competitor for President Trump is seventy-year-old senator Elizabeth Warren. There is no doubt that Warren is capable of getting some voters to take her seriously. She’s won a Senate race in Massachusettes.

Sen. Warren is intelligent but comes with heavy baggage. She carries around a razzle, dazzles bag of stardust that she disperses on the simple-minded. But most sensible people see her as just a squeaking woman with a penchant for touting super-liberal fantasies. Warren wants to be President Robinhood. 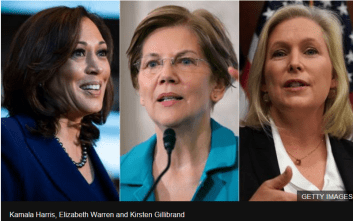 The Three Amigas: Liberal Media Darlings, Set to Battle Each Other — Estrogen On Steriods

God bless Senator Warren’s husband to be able to put up with the squeaks coming from her voicebox for so many years. The nation is not ready for those squeaks on the world stage. YIKES! Senator Warren (a.k.a. Pocahontas) is a middleweight.

Julian Castro, 44-years-old (former Mayor of San Antonio and Secretary of Housing and Urban Development) is a second-generation Mexican American who thinks he’s the reincarnation of Pancho Villa, a.k.a. Jose Arango Arambula. Castro who served in the Obama administration is brilliant but has as much charm as a doorknob.

He is hell-bent on seeing to it that Mexico does not pay for Donald Trump’s border wall.

Castro is a Welterweight. To many Americans, Castro is too ethnic to be President — somewhat like Jesse Jackson was back in his hay-day — charming to some but too ethnic to be president. Hey Castro, if you seriously want to challenge President Trump, go get some charm and some bandwidth.

These Dems are eyeing President Trump and thinking to themselves, hey, if he (a Reality TV Star) can do it, so can I. Trump is charismatic.

Currently, the top-notch donkey to throw its hat in the ring is Senator Kamala Harris. Harris is a former California State Prosecutor. She also is knowledgeable but comes across as someone who is on some (legal drug) medication to keep her stable. During Senate confirmation hearings, Harris is as relentless as a pit bull — latching on to its opponent — with her line of questioning of nominees.

Harris seems to get off on humiliating people. Sociopathic?

Fifty-four-year-old Harris is known as a pit bull in a skirt — not unlike gangster-rapper Eve. The difference between them is: Eve used her body to get where she is, while Harris used her brain — though there have been rumors about Kamala Harris’ body temperature.

Harris is more politically akin to Bill and Hillary Clinton. They talk “the Black talk” out of sheer political expediency but secretly conspire to castrate black men. Harris is a media darling, but she is a clear and imminent danger to African-Americans.

Senator Harris is a Middleweight. Harris could punch upwards.

Rep Tulsi Gabbard: A reformed red neck turn Democrat. Gabbard could be easily described as the female version of former Senator Robert Byrd. Gabbard trumps up her past as an extreme diversity denialist of being raised in a Conservative Republican family with bigoted views.

The one good thing Rep Gabbard has going for her is that she is a military veteran. So far of all the candidates to announce their candidacy, she comes across as the more stable person of the pack.

Gabbard and Trump comparisons? The last persons to switched party affiliation based on political expediency, during a campaign, aside from Bernie Sanders and a confused Ross Perot, was Donald Trump. And so far Trump has proved himself to be an awful B J with consecutive lousy hair days — creating one hateful political disaster after another.

Representative Tulsi Gabbard is a Light Welterweight with the potential to punch upwards.

Senator Kirsten Gillibrand (D-NY). Kirsten pronounced as curse ten or ten afflictions is known to many as a flip-flopping backstabbing Dr. Jekyll and Ms. Hyde type of person. Kirsten is known for knifing both friends and foes alike in the back. She is considered as a rancid political opportunist of a third kind. 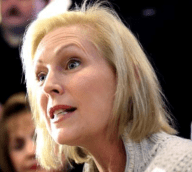 Sen Kirsten Gillibrand Perched to fly over the Cuckoo’s Nest

Having the 52-year-old Gillibrand in the White House would mean the Department of Defense would have to give her pseudo-nuclear codes. Some believe that a major catastrophic event could occur if Gillibrand were to take control of the real nuclear systems — if she won the presidency.

Kirsten Gillibrand is a pip-squeak Featherweight.

The world can say what it wants to about Trump — whether he’s bigoted or not — he has charisma. Additionally, he has the unemotional and detach-ability character of a strong leader.

These are the junior varsity lightweight contenders who have thrown their hats in the ring: Richard Ojeda, Pete Buttigieg, Mayor of South Bend
Indiana. Pete Buttigieg will punch upwards financially but won’t make it to the White House as president. The majority of American voters aren’t ready for an openly gay president — yet. But he will pave the way as Shirley Chisholm, Jesse Jackson did for Barack Obama and even to an extent as the demagogue Al Sharpton has done. Other colts who have bolted the barn are Andrew Yang, and John Delaney.

These are the strategizing slow planners: Cory Booker, 49, the former Newark mayor. Booker is articulate and confrontational. Booker thinks he’s Spartacus — leader of some escaped slaves of the past.

Well, at least he did not say he was Nat Turner because that would have white Americans looking at him sideways.

Many people think Booker is comparable to Senator Lindsey Graham, who some say is a gay man who is too frightened to come out of the closet. Booker is a Lightweight. 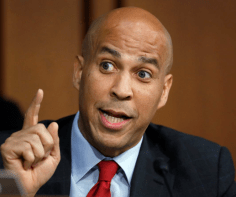 Hey Cory, you can come out, buddy, ain’t nobody going to bother you.

The question is: can O’Rouke transfer his southern charm to the national stage? O’Rouke is a light heavyweight bogged down by super-liberal ideologies.

Of the four candidates mentioned above, Joe Biden is the only one with mass appeal. However, Biden stalked by vestiges of corruption charges – involving his son — leveled against him by Trump and his administration. Biden is running on fumes.

To date, the Democrats have yet to put on display a super heavyweight to take on President Trump. At this point, President Trump and most of his cowardly staff is his worst enemy for the 2020 elections.

At first, Beto O’Rouke,  the former Texas congressman was coy about throwing his hat in the ring. O’Rouke is charismatic and intelligent. In 2018 O ’Rouke ran an impressively challenging race against U.S. Senator Ted Cruz (R Texas) for US Senate seat —  O’Rouke lost to Cruz. Cruz also ran for president against Donald Trump in 2016. Back in 2016, candidate Trump revealed that Cruz’s father was involved in the assassination of President John F Kennedy. On Friday, October 18, 2019, Hillary Clinton claimed in a podcast that Rep Gabbard (D Presidential candidate) was a Russian asset.

Since then, most of the other Democratic presidential candidates and other Dems have roundly chastised Hillary Clinton for her comment on Gabbard being a Russian asset. The counter-argument is: Gabard is a military veteran and a sittingU.S. Congresswoman. In 2001 FBI agent Robert Philip Hanssen was arrested for spying for the Soviet Union from 1979 to 2001 – 22 years of espionage.

The man or woman is untouchable or beyond reproach. Having said that: Hillary should present the evidence to the FBI that will lead to proof of her accusations against Gabbard or shut up and go sit down. To date, the Democrats have yet to put on display a super heavyweight to take on President Trump. At this point, President Trump and most of his cowardly staff is his worst enemy for the 2020 elections.